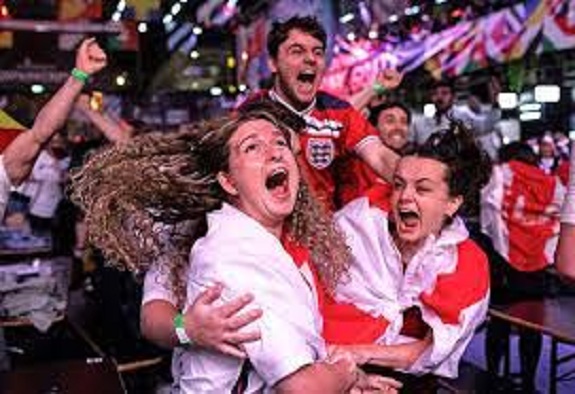 As I got ready for my day today, I listened to the radio as I sometimes do.  You can imagine what nearly everyone was talking about.

Several commentators remarked that “Only football can make you feel like this”.  Is that really true?

Here are two headlines from popular newspapers this morning:

Daily Star “Is this the greatest dream ever?”

Don’t get me wrong – I’m not being a killjoy.  I certainly don’t begrudge the fans who are feeling joy, satisfaction or elation this morning.  I really hope they enjoy the experience.

Sometimes I just wish we hadn’t, as a society, learned to ‘settle’ for … well, so little.

In a world where it is now seen as normal for there to be an ever-increasing epidemic of poor mental health, meaninglessness, apathy and addictions  Where the biggest killer of men under 45 is now suicide.  Can’t we have a greater dream than winning the footie?

Let’s unpack the statement a bit, just for fun.

Only your thinking can do that.  Your stories about who you are, your beliefs, your values, what you make important, which team you happen to support, and which country you happen to have been born in.  If it was football making us feel a certain way, then there wouldn’t be such a range of individual, widely varying, responses to the same football game.

We are wired for connection – and we need to belong, to be part of a group that we identify with.  I get it – and this predisposition has many positive consequences, such as community, compassion (at least towards ‘us’ if not towards ‘them’).  You could argue that this human trait is what’s ensured our survival to date.

But there are less desirable consequences too, one of which is tribalism, or in the case of countries, a nationalism that can start to look ugly and divisive.

And “Only football can make you feel like this”.  Really?

No, only football.  Apparently.

I’ve heard a lot of people saying “We did it!”

In response to which I always think:  Well, no.  Actually YOU didn’t really do anything! You didn’t kick a ball, or score a goal.  I don’t say this out loud of course – I know I’m expressing a minority view here!

I’ve been learning a lot in the last few years about the rise and fall of civilizations, or how societies collapse.  It’s been well studied, and leads me to conclude this:

It wouldn’t be odd if this civilization were to collapse. It would be odd if it didn’t.

They all do.  Many scholars have characterised the stages of a society – from rise to fall.  Looking at these analyses, it would seem that we are in Stage 6:  the final stage.

Interestingly, one of the features of this stage is that the populace become obsessed with and hero-worship – wait for it – sports, celebrities, entertainers and musicians.  Ring any bells?

Previous societal collapses throughout history have all been relatively local.  There are two big differences this time:

It seems ironic to me that this victory happened in the same week as the Police, Crime, Sentencing and Courts Bill passed through Parliament and was made into law. (5th July 2021) This gives the police sweeping new powers, and essentially means our right to peaceful protest is under threat.

Because we must not have anyone disrupting the lawful business of destroying the planet and sacrificing the lives of millions (billions?) for the profit of a few.

Maybe that should have been front-page news this morning?  It seems sad to me that the vast majority of British people either don’t realise this has just happened, or don’t much care.

5 thoughts on “Only Football can make you Feel Like This”

"I have run out of superlatives to describe how fabulous speaking with Kim is. She has been a magnificent coach for me and meeting her has been a truly transformative life experience. Kim has helped me to navigate through a really tricky period in my life by helping me develop a profound understanding of the impact of thoughts on my everyday experience. Her teachings have helped me feel at peace and gain such incredible insights that help me every day. Bless you Kim and I will always be grateful."

"She has a manner that allows you to feel heard, respected and challenged all at the same time. Right from the first time I spoke to her I felt entirely and blissfully comfortable with her. She's happy, she's at ease, she's joyful and she's honest. I always think it's important to find a coach who seems at peace themselves... She has absolutely no airs and graces, she's modest, she's human. If my best friend was in pain - it's Kim I'd want them to go and see. I trust her implicitly. She's a gift to us all. She will help you see how fortunate you are to be alive."

"How has my life changed? I’m more present, I show up, I’m calmer, more joyful. I have a peace of mind I never thought possible. I’m much more deeply connected with those around me as well as with my clients. I feel truly alive!"

"I have a fair amount of experience of coaching. In fact, I train in-house coaches. I’ve never come across a coach as skilled as Kim. I was struggling with a really difficult situation, and completely unable to envision a goal or see any way forward (very unusual for me). Kim asked me a few simple questions. But those questions were so powerful, I was almost physically jolted by the strength of the emotions they called up. By the end of our session, the decision I needed to take was so clear, it was as if I’d always known it. Implementing it since has been completely easy. I still don’t know how she does it, but I’d recommend Kim and her coaching to anyone."

"Thank you doesn’t even begin to fully express my gratitude for how you’ve helped me transform my life. I have spent time since our coaching feeling completely at peace. The sense of utter connection and love and peace was breathtaking! I felt a little like I was a bit tipsy, but with a hangover that feels like a quieter mind and clarity. I wonder if the powers-that-be could make a one-to-one with Kim compulsory for all people? I reckon it would change the world."

"Having just finished a coaching conversation with Kimberley Hare I find myself in a space that I occupy more and more often since my coaching began. It is a space of quiet, purposeful, calm where I can hear myself think, trust what I am hearing and appreciate that I do know what to do and that I have nothing to fear. This experience is different to coaching I have had in the past. I am not coming away with strategies or to-do lists or even a short lived excitement that I can conquer the world. This runs deeper, space is made, pressure is removed, allowing is allowed. A forgotten self that I trust and love wholeheartedly is gently re-emerging."

"I just wanted to say a few words of thanks to you Kim. There is no area of the “human experience” that will not be touched by the realization you have allowed me to have. Thank you feels rather inadequate, but I’ll say it anyway...THANK-YOU!"

"Kim is a fantastic coach. Through her genuine, innovative coaching Kim enables a safe environment for individuals to open their mind, explore their infinite creative potential, and create a wonderful life. I have felt truly blessed to witness this first hand in groups and as an individual. In a shockingly short space of time my life is transforming both professionally and personally. My life is unfolding in a way that feels spectacular for me. I cannot wait to explore more of the concepts and ideas that Kim is sharing! Everyone should experience this!"

"Thank you Kim, you have challenged me, opened my mind, provided a guiding path and changed my life. Namaste."