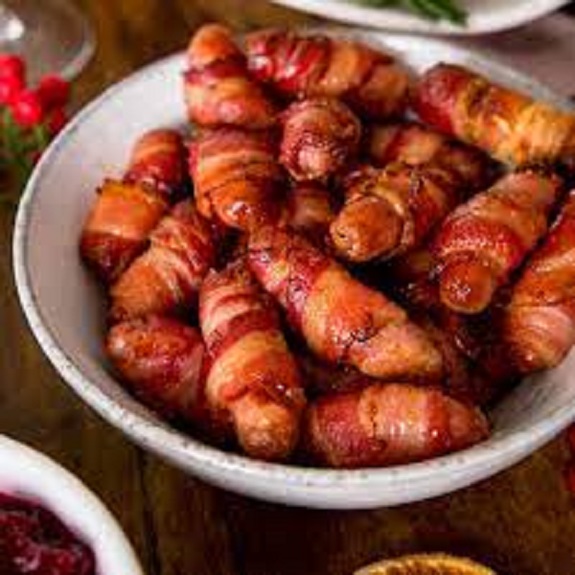 You may have seen the many warnings recently from mainstream media of all kinds that we might not be able to get our pigs in blankets this Christmas.

Horror of horrors!  As if life wasn’t bad enough!

Note for my non-UK readers:  Pigs in Blankets are a peculiarly British tradition where small pork sausages are wrapped in bacon and served with the Christmas turkey.

We are mostly told by the media (and the Government) that this is just a “temporary supply chain problem” caused by the pandemic.  Well, not really true.  The pandemic has certainly exacerbated issues, but the media aren’t telling us the whole truth.

They don’t tell us enough about the way Brexit is a major cause of these problems.  It’s almost as if you’re not allowed to mention Brexit these days in case you upset people.

And the media aren’t telling us nearly enough about how climate catastrophe around the world is already impacting our supply chains – and how this is only going to get far worse.

Let’s take just one example: “Chipageddon”, the global shortage in computer chips that has hit over the last year.  Taiwan produces around 60 to 70 percent of the world’s semi-conductor chips, and 90 percent of the most advanced ones.  Making computer chips is incredibly water intensive — a single chip-laden silicone wafer needs about 8,000 litres of water to produce.  Taiwan is now in the grip of its worst drought in over a century, caused by climate change.

I could give you countless other examples.

And brace yourself, because everything is going to get much, much more expensive.

I’m arguing that the mainstream media is not doing an adequate job.

Their job is to tell us what’s going on, right?  Truthfully.  And they’re not.

I seem to remember a time when it seemed like they did, but perhaps that’s just rose-tinted nostalgia on my part?  I guess it’s hardly surprising given the vested interests of their owners.

I’m not blaming individual journalists, most of whom came into the profession determined to tell the truth to the public they serve.

YouGov figures show British trust in the press to tell the truth has fallen, with less than half believing BBC news journalists are honest and impartial.  It’s not just the BBC.  Trust in journalists is falling across the board.

The 24-hour news cycle has long ago passed over the “Code Red for Humanity” that came out in the latest IPCC report in July this year.

There has been and will be a flurry of reporting as COP 26 comes around in Glasgow next month.

I imagine, sadly, that this too will be quickly replaced in the news cycle by whatever mainstream media can find to hypnotise us with the trivial.

(As an aside, I dislike the term ‘Climate Change’ these days.  It sounds so neutral doesn’t it?  Oh, our climate is changing? – how interesting!  Let’s call it what it is:  Climate Catastrophe.)

Fiddling while Rome burns kind of sums it up.

I watched all the episodes of the recent “Earth Shot Prize” on telly.  All wonderful ideas and innovations to be sure – that speak to our incredible human ingenuity.

But why, in the face of the biggest existential threat humanity has ever faced, is the prize a mere million dollars for each of the winners?  Why not a billion?  Or ten billion?

The award ceremony where the winners of each category were unveiled was a lavish Oscar-style celebration, with performances by Coldplay and others in between the prize-giving.

Don’t get me wrong – I love Coldplay!  And I really admire their stance on trying to continue doing what they love in a zero-carbon way. https://www.youtube.com/watch?v=WuyM70alnb8

But it’s as though we cannot possibly be expected to sit through more than five minutes of serious stuff without being entertained!  Like we’re children.

One of the things I’ve learned a great deal about over the past few years is the Rise and Fall of Civilizations – more than 500 civilizations that have come and gone.  It’s all been very well researched.  Here’s one example of many summaries:  The Collapse of Complex Societies,

It wouldn’t be odd if our civilization was to collapse.  It would be odd if it didn’t.  They all do.  However, this one is far more serious because of two things:  globalisation, and the fact that we’ve overshot our planetary boundaries.

There are six stages, and the final stage – just before collapse – is characterised by the rapid rise of uber-wealthy elites, increasing social injustice and corruption.

Do you know that today there are 8 billionaires who own more wealth than half the rest of the population?  And the wealth of these billionaires (some of them soon to be trillionaires apparently) has risen sharply during the Covid pandemic?  https://www.oxfam.org/en/press-releases/just-8-men-own-same-wealth-half-world

The final stage is also characterised by what we might call “Bread and Circuses”.

In a political context, the phrase means to generate public approval, not by excellence in public service or public policy, but by diversion, distraction or by satisfying the most immediate or base requirements of a populace — by offering a palliative: for example food (bread) or entertainment (circuses).

Juvenal, a Roman poet, who originated the phrase, used it to decry the “selfishness” of ‘common people’ and their neglect of, or ignorance about, wider concerns.  So, the idea has been around a while!

The final stage of every civilization’s collapse is characterised by the near ‘worship’ of celebrities, sportspeople, entertainers and musicians.  Ring any bells?

Do you know what I regard as the most existential risk of all?

Our diminishing capacity for collective sensemaking.

Sensemaking is the ability to generate an understanding of the world around us so that we may decide how to respond effectively to it. When this breaks down within the individual, it creates an ineffective human at best and a dangerous one at worst.

At the collective level, a loss of sensemaking erodes shared cultural and value structures and renders us incapable of generating the collective wisdom necessary to solve complex societal problems like those we face.

There are so many threats to sensemaking right now:  Identity politics, rapid polarisation, the widespread distrust in mainstream media and public institutions, conspiracy theories, mass disinformation technologies.  Fake news working in tandem with social media algorithms that are designed to hijack our limbic systems.

It leaves me feeling we have little hope of generating the coherent dialogue – let alone the collective resolve – required to address the global and interconnected predicaments facing us.

As Daniel Schmachtenberger has said: “We are approaching the power of gods, but without the wisdom of gods.”

But hey, as long as we have our pigs in blankets this Christmas, right?

Obviously I’m being sarcastic here. I don’t eat them.

One thought on “Pigs in Blankets, Bread and Circuses”

"I have run out of superlatives to describe how fabulous speaking with Kim is. She has been a magnificent coach for me and meeting her has been a truly transformative life experience. Kim has helped me to navigate through a really tricky period in my life by helping me develop a profound understanding of the impact of thoughts on my everyday experience. Her teachings have helped me feel at peace and gain such incredible insights that help me every day. Bless you Kim and I will always be grateful."

"She has a manner that allows you to feel heard, respected and challenged all at the same time. Right from the first time I spoke to her I felt entirely and blissfully comfortable with her. She's happy, she's at ease, she's joyful and she's honest. I always think it's important to find a coach who seems at peace themselves... She has absolutely no airs and graces, she's modest, she's human. If my best friend was in pain - it's Kim I'd want them to go and see. I trust her implicitly. She's a gift to us all. She will help you see how fortunate you are to be alive."

"How has my life changed? I’m more present, I show up, I’m calmer, more joyful. I have a peace of mind I never thought possible. I’m much more deeply connected with those around me as well as with my clients. I feel truly alive!"

"I have a fair amount of experience of coaching. In fact, I train in-house coaches. I’ve never come across a coach as skilled as Kim. I was struggling with a really difficult situation, and completely unable to envision a goal or see any way forward (very unusual for me). Kim asked me a few simple questions. But those questions were so powerful, I was almost physically jolted by the strength of the emotions they called up. By the end of our session, the decision I needed to take was so clear, it was as if I’d always known it. Implementing it since has been completely easy. I still don’t know how she does it, but I’d recommend Kim and her coaching to anyone."

"Thank you doesn’t even begin to fully express my gratitude for how you’ve helped me transform my life. I have spent time since our coaching feeling completely at peace. The sense of utter connection and love and peace was breathtaking! I felt a little like I was a bit tipsy, but with a hangover that feels like a quieter mind and clarity. I wonder if the powers-that-be could make a one-to-one with Kim compulsory for all people? I reckon it would change the world."

"Having just finished a coaching conversation with Kimberley Hare I find myself in a space that I occupy more and more often since my coaching began. It is a space of quiet, purposeful, calm where I can hear myself think, trust what I am hearing and appreciate that I do know what to do and that I have nothing to fear. This experience is different to coaching I have had in the past. I am not coming away with strategies or to-do lists or even a short lived excitement that I can conquer the world. This runs deeper, space is made, pressure is removed, allowing is allowed. A forgotten self that I trust and love wholeheartedly is gently re-emerging."

"I just wanted to say a few words of thanks to you Kim. There is no area of the “human experience” that will not be touched by the realization you have allowed me to have. Thank you feels rather inadequate, but I’ll say it anyway...THANK-YOU!"

"Kim is a fantastic coach. Through her genuine, innovative coaching Kim enables a safe environment for individuals to open their mind, explore their infinite creative potential, and create a wonderful life. I have felt truly blessed to witness this first hand in groups and as an individual. In a shockingly short space of time my life is transforming both professionally and personally. My life is unfolding in a way that feels spectacular for me. I cannot wait to explore more of the concepts and ideas that Kim is sharing! Everyone should experience this!"

"Thank you Kim, you have challenged me, opened my mind, provided a guiding path and changed my life. Namaste."